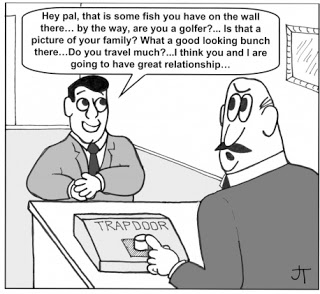 Definition
? a good understanding of someone and an ability to communicate well with them:

In all aspects of NLP training they constantly bang on about the importance of establishing good rapport. This can be in any context, NLP quack therapy, getting on in their career, getting into someone's pants or any other situation in life.

It is just common sense, of course it is important to have rapport. That isn?t the problem here, with NLP the problem is the methods they teach to achieve rapport and the motivation for doing so.

NLP teaches that someone will have better rapport with someone else who is similar to them. While this is true it then goes on to teach that they should pretend to be like the person they are attempting to build rapport with. This is simple mimicry and of course just makes the NLPer seem false and often creepy.

They use NLP eye clues (completely made up nonsense) and language clues to attempt to work out if you are an auditory, visual or kinaesthetic/feeling type and then mimic this rather than being themselves. Then they move on to feign an interest in anything you are interested in. Some can be convincing on this until you get to know them and then realise that they know nothing at all about the subject. Then they use overwhelming compliments to make it difficult for you to object to them.

In summary the NLP method of building rapport is nothing more than the skills of a confidence trickster or hustler. Like everything with the NLPer the motivation is usually self-interest. The only reason they are faking rapport with you is because they want something from you. Rapport is most often used by the NLPer to disguise a lie or hide manipulation. 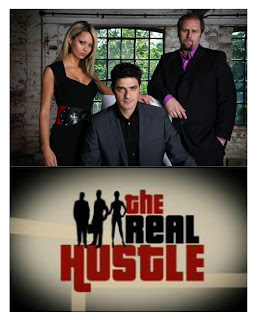 
- Breaking Rapport
Have you ever wondered why you'd rather just break rapport with someone? Here's an example. You've just had a meeting with your boss and he says something which didn't quite go down well with you, for whatever reasons. Perhaps it was something...

- Rapport Building Skills
What is rapport? Rapport building skills, like any other skills can be learned and developed. How good one gets would depend on the person's desired outcome. What is your desired outcome in this area? To establish rapport with any person, at any point...

- Resistance Is A Sign Of Lack Of Rapport
If resistance is the sign of lack of rapport, then how do we build rapport? Instant rapport is built when... 1. People like people who are like each other. What?... Well to put it plainly, if you enjoyed photography as I do... we'll somehow just click...

- Some Helpful Nlp Tips For Building A Strong Bonding
The Neuro Linguistic Programming offers some amazing tips for effective rapport building with just anybody. The method is a creation of 1970s and has gradually gained a wide popularity throughout the world. NLP is also very simple to learn and takes...

- The First Basics Are The Four Pillars
Rapport, and specifically that quality relationship of mutual trust and responsiveness known as rapport. Whatever you do and whatever you want, being successful will involve relating to and influencing others. So, the first pillar of NLP is to establish...